This week I am at the Annual Drosophila meeting, aka the fly meeting. During my PhD I was a fly pusher, and as I never got the chance to attend the meeting then, I am very excited to finally have a chance to be here!

The meeting is taking place in Chicago, with its rising skyscrapers and the beautiful view of lake Michigan. But at this time of the year the most striking feature is the cold, enhanced by the wind that gives the city its nickname. Even the flies are feeling the cold:

Luckily it is warm inside the Sheraton Hotel where the conference is taking place, and the business of presenting and discussing science has been going strong. Here I highlight some of the talks that grabbed my attention.

The conference started on Wednesday evening with the first plenary session. The Larry Sandler Award for best PhD dissertation in the field was awarded to Zhao Zhang, now based at the Carnegie Institute for Science. Zhao gave a talk about Rhino, a protein that follows the great tradition of interesting fly gene names (eggs of these flies only have one dorsal appendage, instead of the usual two). In his interesting and witty talk he explained how during his PhD he examined the role of Rhino in piRNA production (piRNAs direct PIWI proteins to silence transposons). He admitted: ‘ In the 1st year of my PhD I couldn’t sleep because I got no results. Then I couldn’t sleep because the results were so exciting!’. You can read about the work in detail in his paper in Cell (and if you are interested in this work, Zhao is currently recruiting postdocs for his new lab!).

The keynote address was given by Allan Spradling (HHMI and Carnegie Institution for Science). Allan started his talk by considering why Drosophila has become such a successful and useful model system. He argued that this was not an inevitability. Over 50 years ago the NIH leaders changed the way they funded research, with a strong emphasis on basic research in a wide range of organisms. However, he warned, there are signs that the NIH may be going back to its pre-1950s approach, focusing on human/mammalian research. He made the case for why this is not a good idea, and why non-mammalian systems are important. Using examples from his lab’s own research, he showed evidence that there is a high level of conservation between model systems, and that discoveries in mammalian and non-mammalian systems can be complementary. He also argued that model organisms are excellent systems in which to make the unexpected discoveries that move science forward, and that the availability of new genomic technologies in mammalian models doesn’t invalidate the need for other systems. In a quote that proved popular on Twitter, he stated: ‘Unless you can create a mouse that reproduces in 10 days and for only a couple of dollars, flies will still be needed’. So what should the community do to prevent such funding cuts? The answer is communication, to both the general public and to politicians, to ensure that the work done on model systems is recognised and appreciated. He concluded by arguing that scientists have been quiet for too long, and that the fly community should lead the discussion on the future of biological research. Allan’s talk generated an interesting discussion, and we were later informed that there is a Drosophila communications committee, focusing on public education and advocacy. They are looking for postdoc/PhD student volunteers, so get in touch with them if you are interested!

Thursday also started with awards, but this time for the best images. The 2015 still image prize was awarded to Gerit Linneweber, for this nice image of a fly trachea:

The best video prize was awarded to Salil Bidaye, for a great movie of moonwalking flies. Check out the paper in Science.

The second day continued with another plenary session. Yohanns Bellaiche (Institut Curie) argued that cellular processes should be viewed in the context of the tissue in which they occur. They are in reality multicellular processes, in which neighbouring cells contribute. He illustrated his point by focusing on cytokinesis. Also in this session, Angela Stathopoulos (Caltech) talked about coordinated migration of mesoderm cells, and how FGF is involved in this process, and showed some great 2 photon imaging. Stanislav Shvartsman (Princeton University)  focused on the kinetics of ERK signalling in the neural ectoderm. For this project his lab developed a technique by which a microfluidic device can easily orient fly embryos. This allowed the examination of hundreds of fixed embryos, and they could work out the dynamics of the process based on these snapshots. Jürgen Knoblich concluded the session with a talk on neuroblasts, neural stem cells that divide asymmetrically in the larval brain. The number of neuroblasts reduces dramatically during pupal stages, and this is preceded by a reduction in the size of these cells. He presented recently published work examining what regulates this process, and the implications of this work for our understanding of tumorigenesis.

The afternoon saw the poster session (with over 900 posters on display!) as well as concurrent sessions. As you may imagine, it is impossible to cover all this science in a single post, so it suffices to say that a lot of exciting science was presented. I leave you with a photo of some of the artistic Drosophila postcards that I picked up along the way! 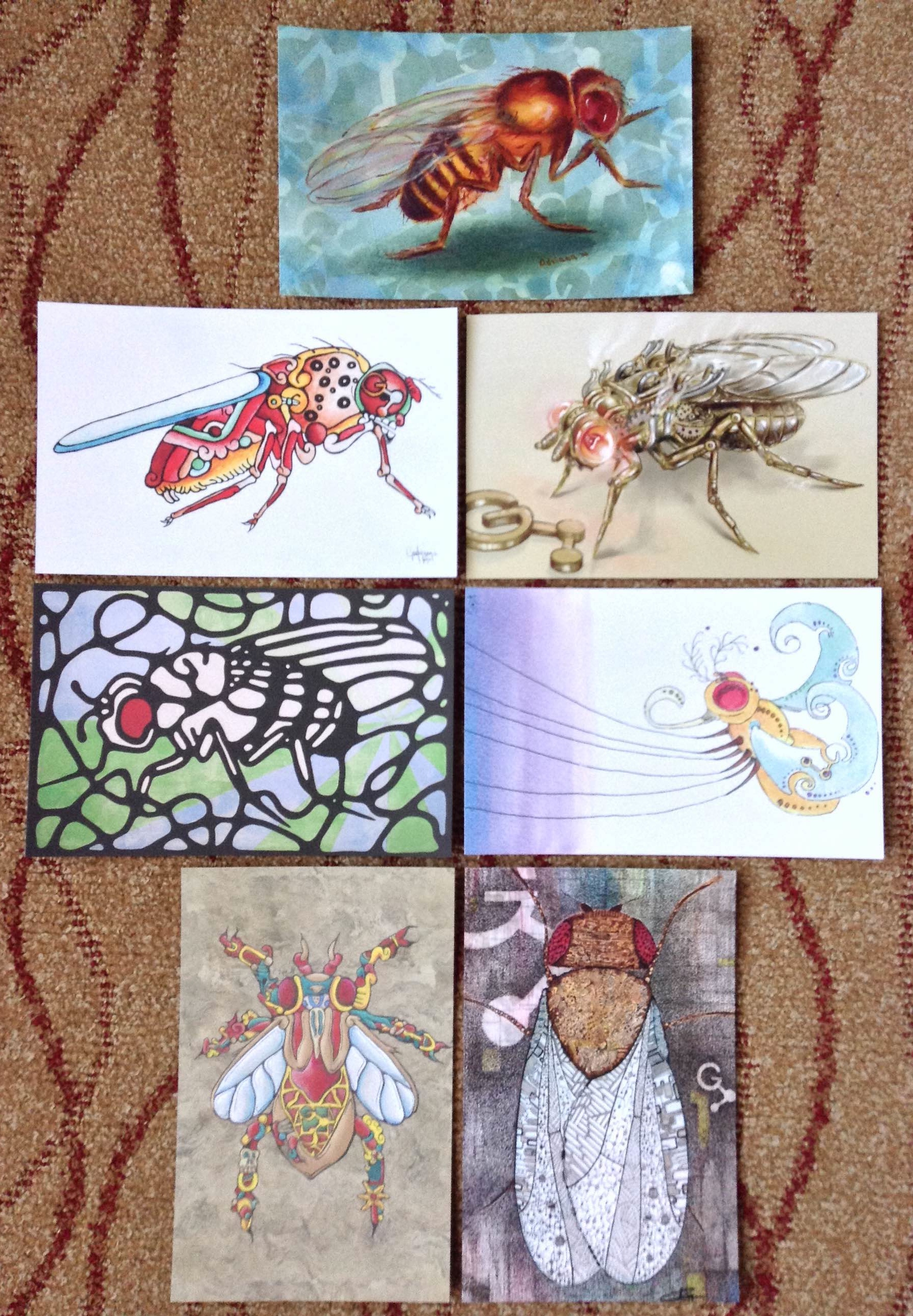