This obituary by Colin Johnson recently appeared in Development.

Jarema Malicki, a pioneer in developmental studies of the vertebrate retina, died on 4th January 2019, shortly after being diagnosed with cancer. Here, I reflect on Jarema’s life and work, with a particular focus on his research interests in zebrafish as a model organism for vertebrate retinogenesis and human ciliopathies.

Jarema was born in Warsaw, Poland, in March 1965. The family visited their small ‘orchard’ property outside of the city at the weekends, and his father often took him into the Tatry Mountains near Zakopane. 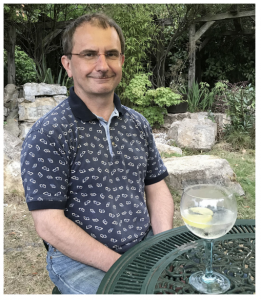 These early experiences inculcated a deep life-long affection for the natural world and walking in the mountains; in particular, he loved the Tatry Mountains and the Tramuntana Mountains of Mallorca. He enrolled at Warsaw University as an undergraduate but in 1987, at some personal risk and with great ingenuity, he escaped the political repression and authoritarianism of the Communist regime. He initially headed east, not west: on leaving Poland, he took a train across Siberia, ostensibly as a holiday trip to Japan. He then entered the USA via California, travelling on to Maine by bus with little money or fluency in English, to stay with friends of his parents. He was forever grateful to Bates College, Maine, for accepting him onto their undergraduate study programme, and for their generosity with scholarships and part-time work as he built a new life in the USA. Jarema did not see his parents again until 1991 and did not return to Poland until 1994. He became a US citizen in 2010.

In 1989, after one year at Bates College, he enrolled on the molecular biology PhD programme at Yale University, working in Bill McGinnis’ lab. Bill had made his name by defining the spatial and temporal expression of homeotic genes during Drosophila development. It was an exciting time to enter the Drosophila field: new molecular biology techniques were providing insights into the role of maternal gene expression, and positional cloning of mutants was beginning to define the often unexpected functions of key players. But the extent to which these insights into fly development applied to other vertebrates, the development of which appeared so radically different, was at the time unclear. Studies were just beginning to show that homeotic genes and the homeobox were highly homologous in metazoans, and Jarema’s PhD work took this a stage further by showing that cis-regulatory elements in the mammalian HOX4B gene (now renamed HOXD4) and the homologous fly gene Deformed (Dfd) were functionally equivalent during head development (Malicki et al., 1992). Jarema was very proud that this research was published in Nature just as he was graduating from Yale in 1992.

Around the same time, Wolfgang Driever was pioneering the use of the zebrafish as a genetically tractable vertebrate model organism that was suitable for large-scale mutagenesis screening in his lab at Harvard Medical School (Boston, MA, USA). The Driever lab started the so-called Boston zebrafish mutagenesis screen in 1992, and Jarema joined the lab in 1993. Jarema was very excited to work on this new model organism for embryogenesis and organogenesis, and was enthusiastic to enter a promising new field at such an early point. He spoke warmly about the camaraderie in the Driever lab, the life-long friends he made during this period, and his enjoyment of sailing in Boston Harbor and Cape Cod as well as hiking in the hills of north eastern USA. The research culminated in the publication of the famous zebrafish issue of Development in December 1996 (Driever et al., 1996), in which Jarema co-authored 11 papers and was first author on two that described mutations affecting the retina and ear (Malicki et al., 1996a,b). The positional cloning of these mutants, which Jarema often gave whimsical names using Polish words, was a rich resource for molecular characterization of function in subsequent years, and provided the basis for many projects in Jarema’s labs in Boston and later in Sheffield, UK.

As a faculty member of Harvard Medical School from 1996 and Tufts University (Boston, MA, USA) from 2009, Jarema focused his research on the genetic basis of vertebrate eye and ear development, how it related to the underlying cell biology of polarity and intracellular transport, and how these cellular processes related to morphogenesis and embryonic patterning. Early successes were the characterization of retinal patterning loci derived from the mutagenesis screen. These included oko meduzy (now known as crb2a; translated as ‘jellyfish eye’), which encodes a crumbs gene homologue (Omori and Malicki, 2006), and glass onion (cdh2), which encodes N-cadherin (Malicki et al., 2003). But his seminal contribution during this period was work on nagie oko (mpp5a; translated as ‘naked eye’; Wei and Malicki, 2002), which encodes a large scaffolding protein in the membrane-associated guanylate kinase (MAGUK) family; subsequent work by Ronald Roepman and colleagues identified it as an interaction partner of the Crumbs complex (Kantardzhieva et al., 2005). This work contributed to the realization that MAGUK proteins regulate plasticity and adhesion at tight junctions by stabilizing multi-protein complexes, as exemplified by the Crumbs complex during retinal development. In a satisfying parallel narrative, mutations in several members of the Crumbs complex were found to be a major cause of human inherited retinal dystrophies. In Jarema’s mind, these insights vindicated the medical potential of zebrafish and the power of forward genetic screens in the model.

Another series of mutants from the screen had photoreceptor loss and kidney cysts, phenotypes that are associated with defective cilia formation. In a prescient paper, Jarema’s group demonstrated that oval (ift88) encoded IFT88, a component of the ciliary intraflagellar transport (IFT) system that is essential for cilia maintenance and sensory neuron survival (Tsujikawa and Malicki, 2004). This work presaged a worldwide effort over the next decade to identify human disease genes for human inherited retinal dystrophies and ciliopathies, and a growing recognition that the cilia is a fundamental mediator and regulator of developmental signalling and cellular homeostasis. Jarema’s lab demonstrated that elipsa (traf3ip1) encoded a second IFT protein, TRAF3IP1/IFT54 (Omori et al., 2008), which led to another satisfying link with medical genetics: mutations in TRAF3IP1/IFT54 are now known to cause Senior-Løken syndrome (Bizet et al., 2015), a ciliopathy that is characterized by nephronophthisis and retinal degeneration. Subsequent work on IFT by Jarema’s group revealed molecular mechanisms for the selective transport of specific ciliary cargoes such as opsin within the photoreceptor (Zhao and Malicki, 2011). These insights were the rationale for the recent development of an elegant zebrafish model of conditional in vivo opsin transport, and this remains an area of active interest by Jarema’s trainees and colleagues.

I first met Jarema in person soon after he had moved to the Bateson Centre at the University of Sheffield in 2012. With an established reputation in zebrafish genetics and an interest in inherited retinal dystrophies, he was an excellent recruit to the zebrafish community that was established in Sheffield by Philip Ingham. We hit it off instantly and over numerous visits, talking about ciliary biology and the challenges facing this new field, we eventually collated our conversations into a review article (Malicki and Johnson, 2017) and set up the ‘Northern’ Cilia Club (now part of the UK Cilia Network). Jarema was an enthusiastic and incisive writing partner: his approach was characterized by lucid and insightful scholarship, attention to detail and generous advice. Chatting to his students and trainees, I soon realized that he was equally rigorous, self-disciplined and dedicated in his professional commitments to them. He was tireless in supporting not only his Sheffield students but also those from the Erasmus Programme, as well as younger scientists from Poland. At the same time, he was keen to share his passions from outside of the lab: good food, good wine, good coffee and the great outdoors. These interests often aligned during lab weekends at his hideaway in the Tatry Mountains, or in meals at one of his favourite restaurants. Above all, he was motivated by his love of science: his enthusiasm inspired those around him to work a bit longer and to try a bit harder. Żegnaj ‘Gruba Rybo’.

I am grateful to Jarema’s many students, colleagues and collaborators who shared their memories and provided anecdotes of his life and science on which this obituary is based. I extend particular thanks to Frederick Walters, Lilianna Solnica-Krezel, Zhou Zhu, Xiaoming Fang, Pawel Lysyganicz, Pamela Yelick, Dominic Norris, Katarzyna Szymanska, Andrew Furley, Ronald Roepman and Marysia Placzek for their comments and feedback on the text, and to Zhou Zhu for the photograph.