I’ve just come back from a lab retreat in a country house in Sussex, UK. The weather was good and we had our scientific sessions, ranging from discussions on Sonic Hedgehog signaling in the neural tube to the latest super-resolution imaging techniques, outdoors in the courtyard. However, every once in a while, we would be interrupted by a group of white peacocks. 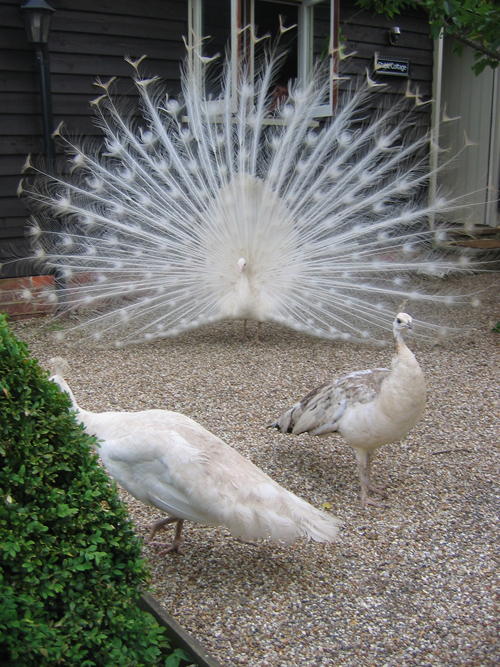 We thought they were albinos, but once I was back in London I did some research and found that white peacocks do not necessarily have a defect in pigment formation, as is the case for albinos. The feathers of peacocks (and several other birds) acquire most of their iridescent color by using optical phenomena such as interference, diffraction and scattering of light. This property is known as structural color and for peacocks it results from way the nanostructure of their feathers interacts with light. For different colors, these different nanostructures are on the scale of the perceived colors’ wavelengths. White peacocks seem to have an altered nanostructure in the barbules (secondary branches) of their feathers.

The birds intrigued me and I wanted to find out how the nanostructure of white peacock feathers is different from the more colorful varieties. However, I couldn’t find anything on this (Does anyone know? Please comment!). Instead I came across something else that took me in a different direction: The development of dinosaur feathers.

How do you study the development of a dinosaur? The obvious way is to compare a younger and an older fossil of the same species, and in China, Xu and colleagues have done just that. They discovered two juvenile specimens of the oviraptorosaur Similicaudipteryx. One is younger than the other and the structures of specific wing and tail feathers differ dramatically between the specimens: Those of the younger one have a ribbon-like structure proximally, whereas the older specimen displays longer feathers without ribbon-like features. This was unexpected because in modern birds, feather morphology does not change after hatching. The researchers concluded that Similicaudipteryx might have undergone molting of feathers at some stage after hatching. Of course, molting takes place in modern birds but it doesn’t result in such severe changes in morphology.

So far, so good. But what really struck me were their speculations about how this change in morphology might have been taking place molecularly. In modern feathers, bone morphogenetic protein (BMP), noggin and sonic hedgehog (SHH) regulate the formation of the different feather components. SHH induces apoptosis between the barbs (primary branches) of the feather. Without SHH, a continuous, ribbon-like structure would form, which is probably what happened in the proximal part the younger dinosaur’s feathers. Xu and colleagues speculate that in Similicaudipteryx, the induction of SHH and other barb-specifying genes were delayed compared to modern birds, where these genes are strongly expressed during the growth of even the earliest feathers. SHH, the regulator of neural tube patterning I deal with every day is thought to have a role in the development of strange dinosaur feathers!

If only we could make a transgenic dinosaur. Then again, maybe not.

One thought on “Of White and Ancient Feathers”