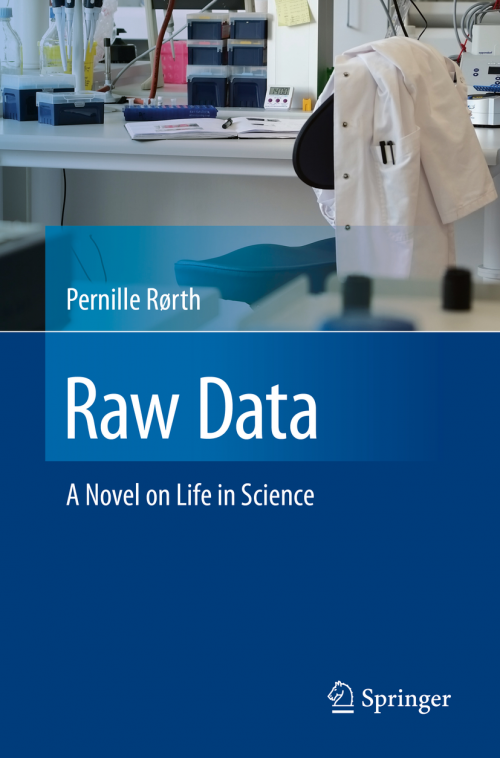 I’ve just finished reading ‘Raw Data’ by Pernille Rørth. As a disclaimer, Pernille ran the lab next door to me when I was a postdoc, and as Editor in Chief at The EMBO Journal helped train me up as an editor – I’ve got a huge amount of respect and liking for her as a scientist and person. I was surprised and somewhat saddened when I heard she was no longer in active research, but intrigued to find out what she was going to do instead. Well, what she has done is written a highly readable novel about research ethics, and I’d really recommend it – both as an abject lesson in how things can go horribly wrong in the lab, and as an enjoyable way to spend a few evenings (I was hooked and read it in a couple of sittings!).

The plot of the novel is one that seemed to me, as someone who has to deal with ethics issues and potential scientific misconduct on a not infrequent basis, all too realistic. Chloe, a talented and successful postdoc in a prestigious Boston-based lab, has just had a Nature paper accepted for publication, and this gives her the kudos she needs to go on the job market. But when Karen, another postdoc in the lab who is struggling with her own project, uncovers potential problems with some of Chloe’s data in the paper, a lab investigation is initiated and – without giving away any of the plot details – things don’t end well for one of them.

As you’d expect from someone who’s spent many years in academia, Pernille’s writing gives an accurate impression of what life in the lab is like – the long hours, the tedious nature of routine experiments, the frustration when things don’t work, the excitement when you get the first sign of the ‘big result’, the friendly banter and petty rivalries between lab mates… The unfolding events, from the  discovery of the problems and the dilemma this creates for Tom (the PI), to the painful and laborious investigation and the inevitable unravelling of a career, are revealed in a highly believable fashion. Tom’s conduct interested me – while he seems to have the best intentions, his claims to be only interested in the scientific truth don’t really hold up in the end, and his man- (or, to be more accurate, woman-) management skills clearly need brushing up! And while you can’t in any way condone what the postdoc did, you can almost understand how she could have ended up there. The fear (and reality) of getting scooped, the certainty that a result must be right, the envy at someone else’s success – some or all of these are emotions we’ve all felt in our research careers. The ending of the book is perhaps all a bit too neat: in many cases of potential research misconduct, I’m not convinced we ever really learn ‘the truth’, whereas things do get fairly well resolved here – but the story certainly echoes with cases I’ve come across.

The book also highlights some of the major flaws in the current system, primarily in terms of the way that a Cell/Science/Nature paper can make or break a career – make if you’re the one to get the paper, or break if you’re scooped by one. The ambitious Chloe was scooped during her PhD (though ended up publishing that work in Development – which I would argue can only be a good thing!) and it’s her determination to avoid this happening again that drives many of the events in the novel. We all know that there’s too much emphasis put on where you publish, and on being first, but it’s much harder to know how to change the system for the better in a practical way. Pernille’s novel doesn’t offer any help on that front, but it exposes the problem in a story that you can almost imagine being played out in labs across the world. And imagining that is scary…

My only criticism – if criticism it is – of Pernille’s book is that I suspect that the non-scientific reader would be put off by the jargon that pervades this novel. In her Q&A at the end (which you should definitely read: Pernille gives thoughtful and insightful answers to important questions about the state of our field), Pernille implies that the novel is aimed at the general public, but I’m not convinced she’ll reach that audience – though I might test this out by lending it out and I’d be happy to be proved wrong! But for the scientifically literate, particularly those just starting out in their research career, this book is a beautifully crafted cautionary tale about life in the lab that will get you thinking about the subtleties and temptations underlying ethical conduct in research.