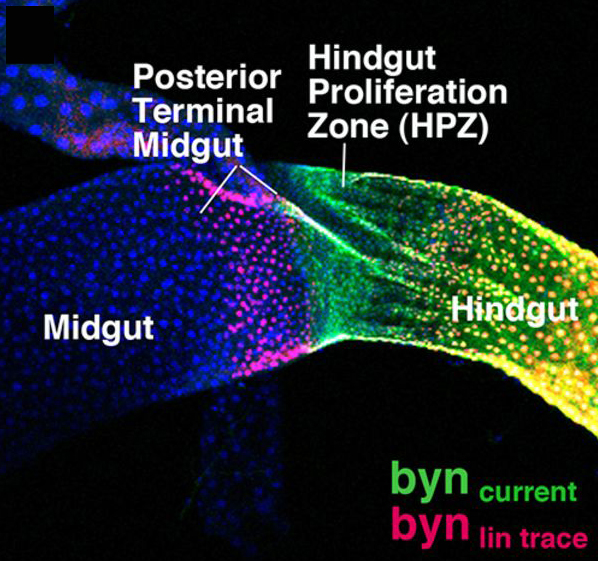 For most of us, we don’t all end up settled as adults in the same town where we were born.  The same is true for many cells, including some stem cells in the fruit fly intestine.  A recent paper describes the migration of progenitor cells, some of which will later become stem cells, in the intestine of developing flies, with the help of stunning images of these boundary-crossing cells.

Adult stem cells divide and differentiate to compensate for cell loss or cell injury in adult tissue.  Understanding where these adult stem cells originate during development and how they migrate to their final position in adult tissue is an important question in stem cell biology.  A recent paper in Development describes the migration of Drosophila intestinal stem cells during metamorphosis.  Takashima and colleagues traced the migration of progenitor cells in the intestine—in the midgut, hindgut, and the excretory Malpighian tubules.  A subset of adult midgut progenitors migrates posteriorly to form the adult ureters, and in later pupal stages these progenitors migrate to the Malpighian tubules to give rise to renal stem cells.  These results establish, for the first time, the origin of the renal stem cells in Malpighian tubules.  Conversely, during early pupal development a subset of hindgut progenitor cells migrates anteriorly, with these presumptive stem cells later differentiating into midgut enterocytes.  Takashima and colleagues found that Wingless helps regulate the balance of hindgut progenitors that differentiate into midgut or hindgut enterocytes.  These results show that the boundary between the midgut and hindgut regions is not stable until later in development.  Pluripotent progenitor cells are able to cross this boundary and adopt the fate of their new domain.  In the image above, hindgut progenitor cells (green) are found in the hindgut-midgut boundary (the hindgut proliferation zone, HPZ).  Early in development, hindgut progenitor cells were lineage traced and later show their migration across the HPZ and toward the midgut (lineage traced cells in red).