The power of stem cells lies in the ability to give rise to many different cell types.  The stem cells found in the neural crest are no exception, and a recent Development paper describes the importance of Foxd3 in maintaining self-renewal and multipotency of these stem cells, and in regulating the fate choice of these cells. 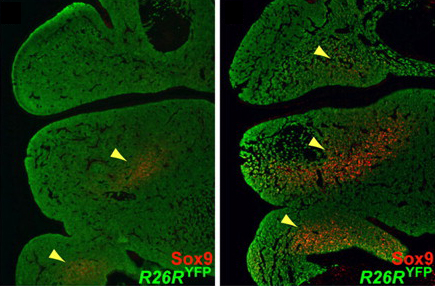 After neural tube formation in the embryo, neural crest cells begin their migration away from the neural tube.  These cells generate a wide variety of differentiated cell types, including neurons, melanocytes, bone, smooth muscle, and cartilage.  Neural crest stem cells can be found in the neural crest population, yet the players regulating their self-renewal and multipotency were not yet understood.  Mundell and Labosky just reported the importance of a single protein – the forkhead transcription factor Foxd3 – in cell fate choice of the neural crest stem cells.  Without Foxd3, cells adopted more mesenchymal fates and cranial neural crest defects appeared.  In addition, Foxd3 mutant cultures of neural crest stem cells gave results showing that Foxd3 is important for maintaining the self-renewing and uncommitted multipotent state of the stem cells.  Image shows an 11.5 dpc cranial neural crest cell population with (left) or without (right) normal levels of Foxd3.  Without Foxd3, the increased appearance of Sox9 (red), marking osteochondral progenitors, suggests accelerated differentiation towards mesenchymal cell fates.

For a more general description of this image, see my post on EuroStemCell, the European stem cell portal.

BONUS!  The stunning unpublished image below, from the authors, shows a section through the headfolds in an 8-somite stage mouse embryo, with Foxd3 (red) and neural crest cells (green) labeled. 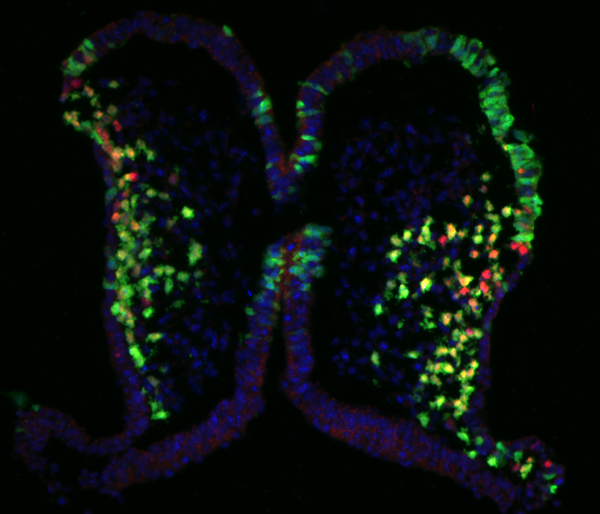