The vertebrate lymphatic vascular network provides crucial circulatory and immune functions but its developmental origin has been a contentious issue, in particular the question of whether lymphatic endothelial cells have an exclusively venous origin. A new paper in Development addresses this issue in the dermis of the mouse embryo. To find out more about the story behind the work, we caught up with first author Cathy Pichol-Thievend and last authors Natasha Harvey (Associate Professor at the Centre for Cancer Biology, SA Pathology and University of South Australia) and Mathias Francois (Associate Professor at the Institute for Molecular Bioscience, The University of Queensland).

Mat and Natasha, can you give us your scientific biographies and the questions your labs are trying to answer?

MF In 2004, I was awarded a PhD in molecular genetics from the University PARIS VI (Pierre et Marie Curie). During this period I worked on nuclear receptors PPARs and their role in cartilage inflammatory response (INSERM UMR-S747- Paris V). At the end of 2004, I moved to Australia to gain postdoctoral experience with Professor P. Koopman, an expert in the field of sex determination and SOX transcription factors (2005-2011, The Institute for Molecular Bioscience, The University of Queensland). 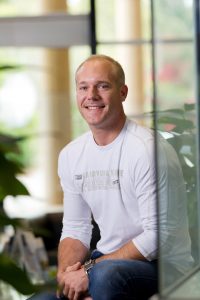 During that time the key discovery from my work identified the transcription factor SOX18 as a molecular switch that induces the lymphatic differentiation program by turning on Prox1 expression in pre-existing veins.

In 2012, I set up my own independent research group at the IMB. Since then we have designed a novel molecular strategy to pharmacologically manipulate developmental transcription factor activity. We successfully identified and characterised small compounds that interfere with SOX18 activity. This gives us a unique handle to complement classic genetic methodologies with pharmacological approaches to study vascular development. The research interest of my group revolves around on how endothelial cell fate is  dynamically regulated at a transcriptional level. To decipher how transcription factors orchestrate lymphangiogenesis and subsequent assembly of vessel networks we rely on the utilisation of mouse and zebrafish model systems.

NH After a PhD with Sharad Kumar focussed on defining the molecular mechanisms underlying caspase-2 activation during apoptosis, I wanted to investigate the role of caspase activation during embryonic development. To this end, I cloned a novel Drosophila caspase, Damm, and in collaboration with Helena Richardson’s group, investigated the role of Damm during Drosophila development. This work ignited my interest in developmental biology and stimulated me to embark on postdoctoral training with Guillermo Oliver at St Jude Children’s Research Hospital. When I joined Guillermo’s lab, the team had just published a landmark paper in Cell demonstrating that the homeobox transcription factor Prox1 is crucial for development of the lymphatic vasculature during embryogenesis in the mouse. The scene was set to investigate how Prox1 controls embryonic lymphangiogenesis and that was the focus of my project. My postdoc in Guillermo’s lab was transformative, it was my introduction to both mouse embryogenesis and transcription factors and I was hooked! I remain completely fascinated by developmental biology! 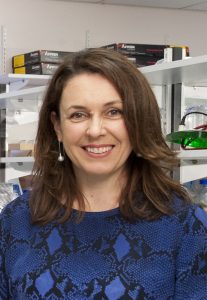 After four years in Guillermo’s lab I returned to Australia to the Centre for Cancer Biology in Adelaide, to establish my independent laboratory focussed on understanding how the lymphatic vascular network is built during development. A really rewarding aspect of our recent work has been our synergy with Hamish Scott’s genetics team at the Centre for Cancer Biology. Together with Hamish’s group, we work to dissect the genetic and developmental mechanisms underlying human lymphatic vascular diseases including primary lymphoedema and non-immune foetal hydrops. It’s an exciting time to be a developmental biologist!

My research program aims to understand how the lymphatic vasculature is constructed during development and how defects in this process result in human disease. We are particularly interested in defining the mechanisms by which endothelial cell identity is transcriptionally programmed and in understanding how lymphatic vessel valves are built.

I understand this is not your first collaboration with Natasha?

MF Tash and I have been long standing collaborators since 2005; at this time we were developing our own independent research programs focussed on embryonic lymphangiogenesis. Given our shared interest in the transcriptional control of lymphatic endothelial cell identity, it made immediate sense to join forces in order to develop this exciting new area of research. We have continued to collaborate since then; we regularly discuss ideas, have published many papers together and often apply together for grant funding to develop our synergistic approach. For this particular paper, our common interest in understanding how the lymphatic vessel network is assembled during development led to our teams making independent but complementary observations while studying the process of lymphangiogenesis in embryonic mouse skin. We therefore decided to join forces and combine research tools to push the investigation further. Our initial observations and discussions regarding clusters of lymphatic endothelial cells in embryonic skin date back to 2008!

And Cathy, how did you come to be involved with this project? 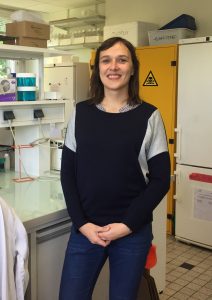 CP-T When I joined the Francois lab, Mat and I discussed several projects to work on. One of them was about the cellular origin of the dermal lymphatics. Mat and Natasha previously observed the presence of isolated lymphatic endothelial clusters in the skin that were not connected to the sprouting lymphatic vessel emerging from deeper tissues suggesting a potential distinct source of lymphatic progenitors. I was really excited about this observation and the biological question behind it so I embraced the challenge of investigating the cellular origin of dermal LECs.

Why has the origin of the lymphatic vasculature been so hard to pin down?

MF & NH Despite the advances that have been made to date, tools and technology have been limiting factors in completely defining the embryonic origins of lymphatic vessels. A major limitation in studying embryonic mouse development is the lack of live imaging capability, so even though we have a good understanding of morphogenetic events as observed in fixed tissues, we have not yet had the capacity to image lymphangiogenesis in real time in the developing embryo. We’re sure to be amazed once the technology is available to do this!

What might be upstream of Prox1 expression in the cells that become LEC progenitors, and why do only certain cells in the capillary plexus adopt the LEC fate?

MH & NF This is really fascinating question and one we don’t yet have an answer to. Endothelial cells within the capillary plexus appear relatively plastic and display markers of both arterial and venous identity. It is therefore likely that many of these cells have the potential to become LEC, however only a discrete population is programmed at particular times and locations in the skin. Whether this is due to spatially restricted cues that turn on Prox1, or to other cellular events remains to be established. We think that the emergence of LEC clusters might act as anchor points throughout the skin to guide the actively sprouting lymphatic plexus towards the midline. During this stage of development the embryo is growing rapidly, so it seems logical that a dual mechanism of vascular growth would allow the plexus to be built and connected more rapidly than one relying on sprouting growth alone.

What might be the functional relevance of building the lymphatic system in this way?

CP-T, MF& NH It is well established that the signalling pathways important for embryonic lymphangiogenesis are reactivated and face dysregulation in pathological states. This is the case during tumour induced lymphangiogenesis for instance, where the production of VEGF-C and VEGF-D by tumour cells promotes the growth of new lymphatic vessels within the tumour microenvironment and facilitates tumour metastasis. Our finding that the capillary plexus harbours lymphatic endothelial progenitor cells during embryogenesis raises the possibility that this, or a similar progenitor source might be called into play during pathological lymphangiogenesis, in contrast to new lymphatic vessels sprouting entirely from pre-existing lymphatics as current dogma suggests.

CP-T Probably one of my best moments while I was working on this project was when I studied the Ccbe1 mutant mouse embryos. We had this hypothesis that if the capillary plexus in the skin is a source of lymphatic endothelial cells, then LEC progenitors should be unable to leave the capillary plexus in signalling mutants that interfere with LEC mobility. We were able to capture images of some lymphatic progenitors “stuck” inside the capillary plexus, and this was a key advance to support our hypothesis.  I remember screening a skin sample from a CCBE1 mutant embryo under the confocal microscope and then seeing it. This observation got me really excited!

CP-T What was really challenging about this project was the fact that we were dealing with a rare event so it was hard to study it. As every scientist I guess, I had many moments of frustration and despair, but that make the “eureka moments” event more pleasant!

What next for you Cathy – I hear you’ve moved to a new lab?

CP-T Yes, I have moved back to France where I am working now at the Curie Institute. I will still work on the vascular system but related to brain tumour biology.

Where will this work take the Harvey and Francois labs?

MF At present,  the lab is focussing on new genes that we have identified as key regulators of lymphangiogenesis. We will use the identification and characterisation of LEC clusters as a readout to characterise subtle phenotypic responses.

NH We would love to build our imaging capacity! I’m fascinated at the prospect of watching lymphatic vessels grow in real time.

Finally, let’s move outside the lab – what do you like to do in your spare time?

MF At the moment I am doing under-water rugby, lots of fun.

NH Weekends involve time at the beach or the park with my kids, together with enjoying the fantastic food and wine that Adelaide has to offer. My early morning boxing class is as good for my brain and my energy levels as it is for my physical health!

CP-T Back in my home country just recently, I am enjoying spending time with my family and old friends.

This is #42 in our interview series. Browse the archive here.