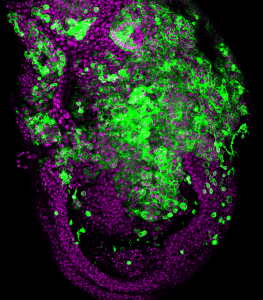 A study at the Institute for Research in Biomedicine (IRB Barcelona) using Drosophila melanogaster has demonstrated that chromosomal instability itself can induce invasive behaviour in epithelial cells and has identified the underlying molecular mechanisms involved.

To perform this study, the team directed by ICREA researcher Marco Milán generated a fruit fly model with chromosomal instability. “The cells started to actively invade adjacent tissues,” explains Marco Milán, group leader of the Growth Control and Development lab at IRB Barcelona and head of the study.

The aim was to study whether chromosomal instability itself has the capacity to stimulate invasive behaviour in epithelial cells. The results published in Developmental Cell indicate that indeed this is the case and they describe a series of molecular and cell mechanisms that favour cell migration and invasion of other tissues.

In particular, the researchers have demonstrated that invasive cells use the actin cytoskeleton and activate the ERK and JNK signalling pathways to trigger a pro-invasive transcriptional programme executed by the oncogene Fos and repressed by the tumour suppressor Capicua.

“These findings are relevant in the context of cancer because they highlight the causal relationship between aneuploid genomes and cell invasion and they identify the molecular elements involved in the process,” say Najate Benhra and Lara Barrio, first authors of the study and postdoctoral researchers at IRB Barcelona.

Milán adds, “the results increase our understanding of the effects of chromosomal instability on the metastatic potential of solid human tumours and identify molecular targets for the development of future treatments”.

This research has been funded by the Ministry of Science, Innovation and Universities.

Created in 2005 by the Generalitat de Catalunya (Government of Catalonia) and University of Barcelona, IRB Barcelona is a Severo Ochoa Centre of Excellence, a seal that was awarded in 2011. The institute is devoted to conducting research of excellence in biomedicine and to transferring results to clinical practice, thus improving people’s quality of life, while simultaneously promoting the training of outstanding researchers, technology transfer, and public communication of science.

Its 26 laboratories and seven core facilities address basic questions in biology and are orientated to diseases such as cancer, metastasis, Alzheimer’s, diabetes, and rare conditions. IRB Barcelona is an international centre that hosts 400 employees and 32 nationalities. It is located in the Barcelona Science Park. IRB Barcelona forms part of the Barcelona Institute of Science and Technology (BIST) and the “Xarxa de Centres de Recerca de Catalunya” (CERCA).