Briony Marshall is a London-based sculptor and installation artist. Initially interested in science, Briony studied Biochemistry at the University of Oxford. After her undergraduate studies she moved on to art and sculpture, but her beautiful pieces have a strong scientific inspiration. Her first solo exhibition is currently at the Pangolin London Sculpture Gallery, and includes several developmental-biology inspired pieces. The Node interviewed Briony and asked her about her work. 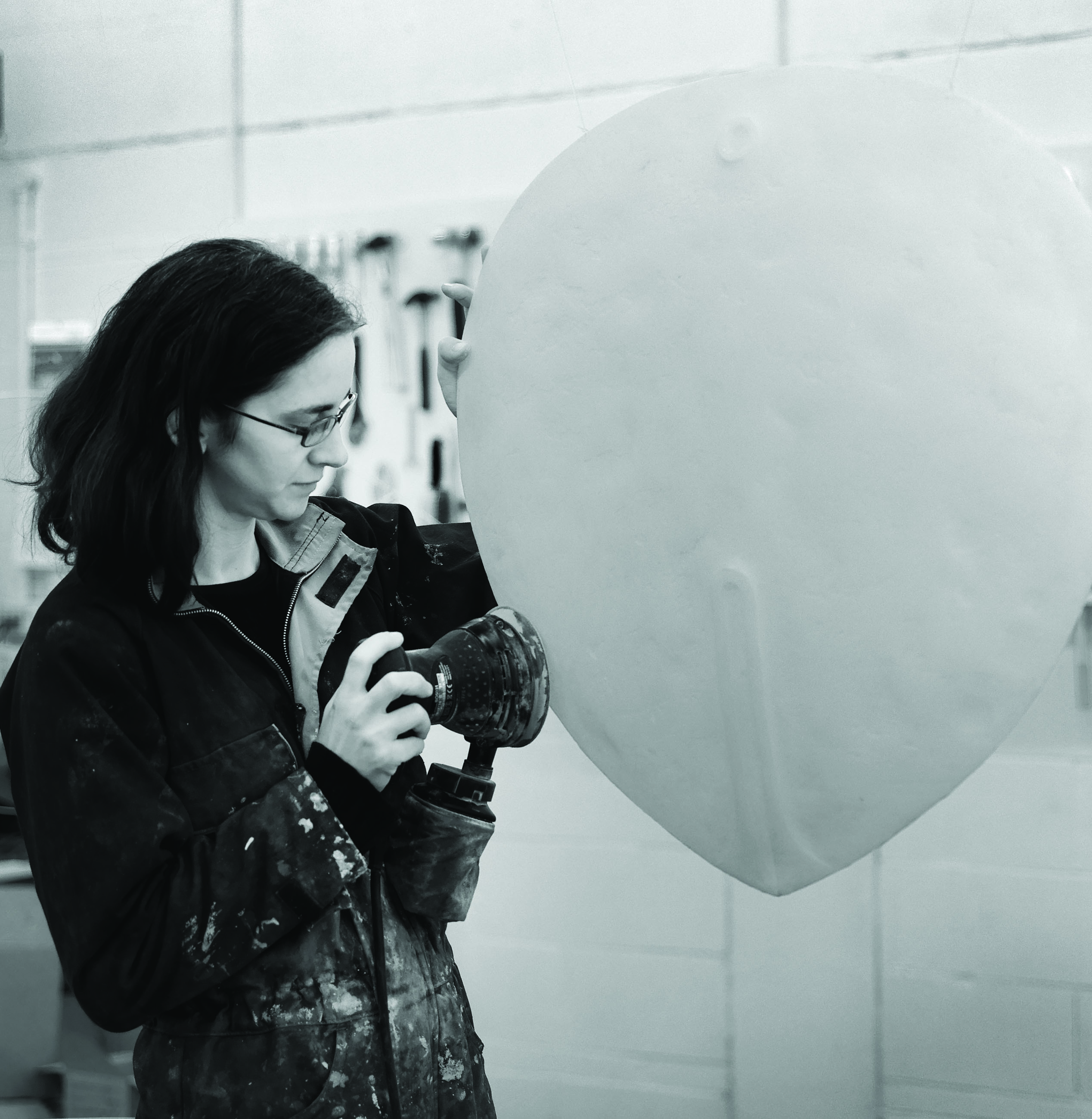 The Node: You initially trained as a biochemist. What made you decide to leave science and pursue an artistic career?

Briony: It took me a while to get there. I think I got a little bit put off by the idea of doing a PhD and research… the long process of being a researcher. If someone could have made me a professor straight away I would have been very happy! I really studied biochemistry because I thought it was the most interesting cutting edge bit of science, I don’t think I ever really saw myself as being a biochemist. It was purely because I enjoyed it and I thought it was a fascinating subject that holds quite a lot of answers to what goes on in the world.

The Node: A lot of your work, including the pieces in this exhibition, are inspired by science. Is science only a source of inspiration, or does your scientific training also instruct your creative process?

Briony: I am a scientist inherently, the way I view the world. I like to unpick how it works. So when I initially turned to art, I felt like I was turning my back on science and my previous career. I was trying to launch myself fully into the art world, which is perceived as a very different environment, and a different process. But as an artist you have to be true to yourself. The unique thing about an artist is that they have a particular point of view on the world, which is related to the whole of the experience that they have had, the times they live in, and their life. So, as I developed as a student (and I never intended it) I just started using science as metaphors. My molecular work looks at parallels between micro world and macro world- the way atoms interact with each other can give you insights into the way people interact with each other, and the way society works. That’s the lens through which I view the world, and it comes out in the work.

I’ve always been a practical person. I think that’s why I’m a sculptor, not a painter. 2D art can be very virtual… it’s creating illusions of other worlds, while as a sculptor you are dealing with materials, and gravity… I think a lot of sculptors are quite practical people- you have to be- and I think the sort of people who are drawn to sculpture are people who like problem-solving, which is very similar to people who are drawn to science.

You also asked about the creative process. It’s similar, in a way, to the scientific process, where you have to accumulate knowledge, you have to work very hard for a long time. But often the important bit is an intuitive leap, when you suddenly view things in a different way. I think that is very common to both science and art.

The Node: Could you explain your creative process a little more? How do you find the scientific themes that inspire your work, and how do they then evolve into an art piece?

Briony: It varies a little bit, but it often starts with reading. Sometimes it is just popular science books, sometimes more detailed research. The internet is a wonderful thing because you can browse and connect, and there are amazing departments that put a lot of scientific knowledge and lectures and information online now. Even 10 years ago, I would have had to be going to scientific libraries! I do a certain amount of research, and then there is a moment of faith and waiting for the idea to pop in.

Often there are themes that I’m interested in. As a sculptor I’m quite interested in how form develops. How you go from nothing to something, which is a creative process as well.  There are creative processes in nature: the birth of the universe in physics, or in developmental biology the development of complex forms. That relates to me as a sculptor- how you create form and complexity.

I have also developed my own methodology where I work really small, in little wax maquetes. I can work really fast on a piece, complete it in a single sitting, and then I will spend longer deciding what scale the final piece should be, and then enlarging it. For each of my Carnegie stages* in the exhibition, you can actually see 3 different scales. Each of them [the stages] has a little maquette that you can pick up and hold in your hand, which really gives you a sense of this little precious thing. And then there’s a series where I was really working out their forms in plaster, and they are almost portrait size. And then the final installation. It took me a while to decide what size to do them. They have a presence, and I really want people to go up and interact with them. They are almost equivalent volumes to a human body, hanging in the space. 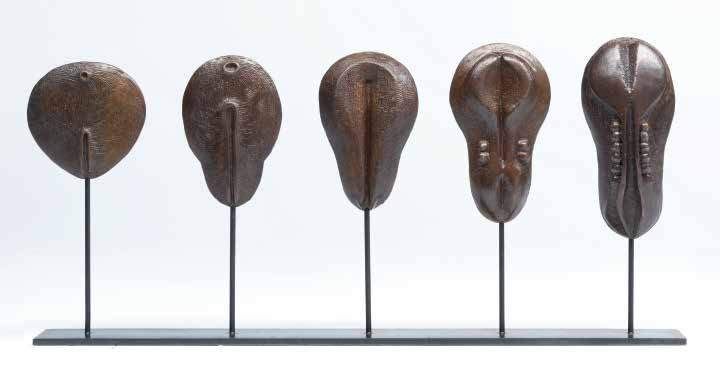 The Node: You mentioned your Carnegie stages piece. What inspired you to create this piece, and what is the message that you are trying to convey with it?

Briony: I was doing some research for another piece in the exhibition, and I came across the charts of Carnegie stages. I was so struck at just looking at the particular ones I picked, stage 6 to 10. They are reminiscent of African masks, minimalist sculptures, of early greek Cycladic art… They [the biological representations] jumped out at me as they seemed already part of the cannon of sculpture. But then they are not, they are part of our own development. I thought it was fascinating. Why is there that link? Do people naturally tune in to these forms because there is some ancient link? And they do: people that come in to the exhibition have made links to various things they connect to in the canon of art.

The Node: Another developmental-biology inspired piece is Embryonic growth, which shows a young human embryo at the centre of a spiral. What was your inspiration for this piece?

Briony: Well, it is slightly embarrassing, because one of the inspirations is a scientist called Ruppert Sheldrake, who had the controversial idea of morphic fields. They are such radical ideas that people baulk at the idea of them. But as a sculptor it’s a fascinating idea: he thinks that some of the reasons why we don’t understand exactly how different parts of the embryo know where they are and develop form is that there is a morphic field… like the gravitational field, that we don’t necessarily fully understand but that we have clear evidence that exists.

In his hypothesis, the developing embryo might be tuning in to the fields of other shapes that have previously existed. As a sculptor that is an amazing idea, that by creating a shape in space you are not just creating it, but creating future resonances. It is an interesting idea, but I think it is more of a metaphor for things, rather than a real scientific thing. But it did make me think about all sorts of things influencing the embryo as it is developing. In the piece, the spiral around the embryo is a Fibonacci spiral, giving the idea of order, mathematical beauty and the patterns that exist. There is genetic inheritance, you have environmental factors, all these things around the developing embryo influencing how it grows, giving it energy, a pattern and a blueprint for its development. 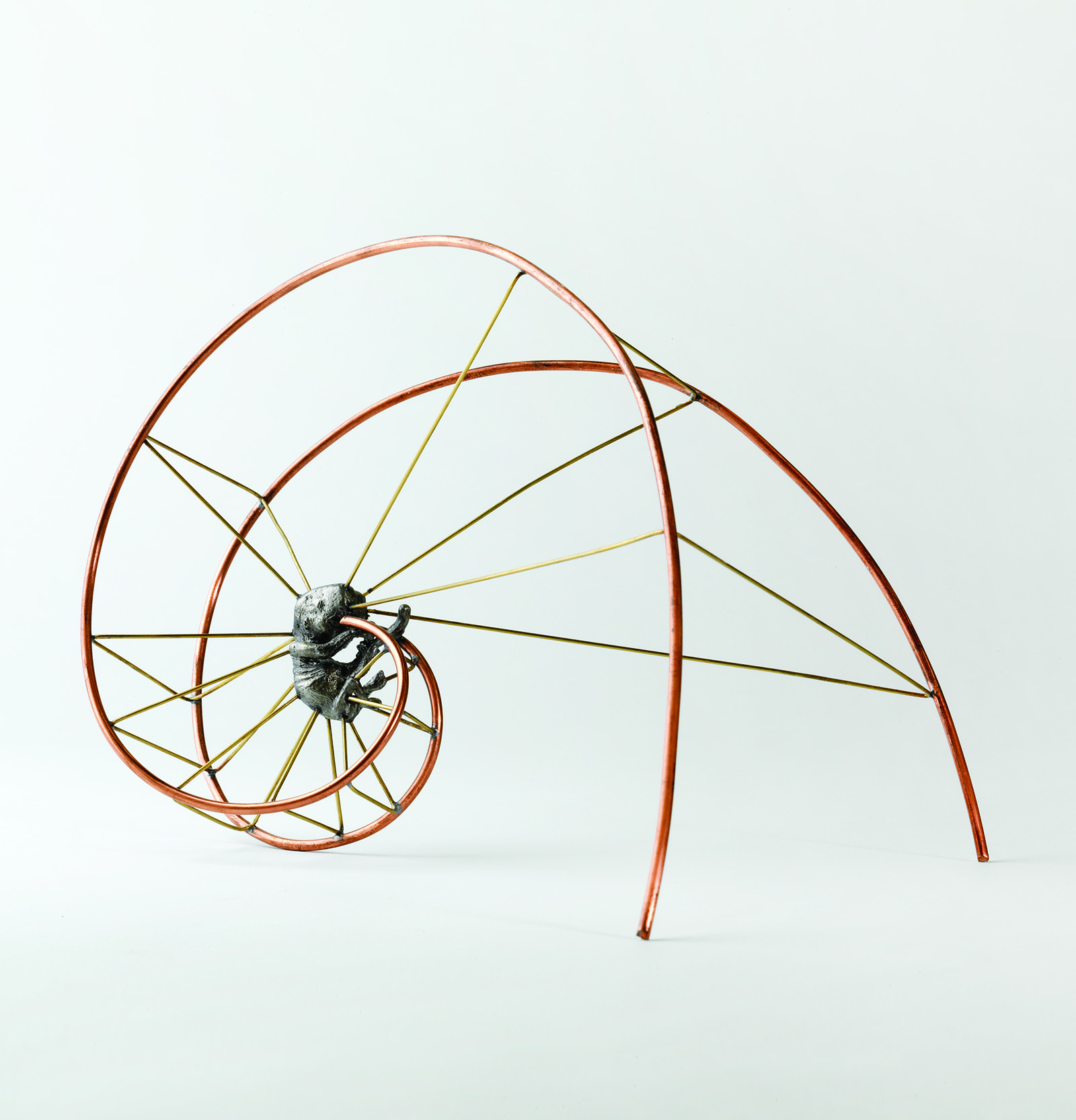 The Node: In addition to creating art you also teach, and you have tutored and lectured in the past on art and science at the Art Academy. I’m curious as to what message you try to get across to your students who are looking for inspiration for their work in science.

Briony: To be honest I haven’t necessarily given advice. The courses have been more showing the breadth of work that people do- there is quite a breadth of art and science, from philosophical to illustrative works. But I have told people that it needs to be a genuine mesh to what they are about as a person, rather than being a gimmick. Some people almost like the aesthetics of test tubes and scientific process, and scratch the surface of it. I think it is such an important part of society. If you are going into that realm you need to go further than the clichés for it to have value. Otherwise it’s a very superficial look.