Jaw joints, in most vertebrate animals that have them, form between a bone in the head called the quadrate and one in the mandible called the articular. The mandibles (lower jaw bone) of most vertebrates is compound, made up of fused bones, but we mammals are different.  We have lots of different types of teeth that processes our food down by chewing. To help with this we evolved a novel jaw joint that allows for both lateral and front-to-back movements of the jaw against the head.

This new joint is between two bones that are nowhere near each other in non-mammals: the squamosal in the skull and the dentary in the mandible. In some mammals, such as humans, the squamosal is fused with other elements, making the temporal bone. In these species the jaw joint is also called the temporomandibular joint, or TMJ.  Remember all those different fused bones in the mandible? Well we modern mammals only have the dentary left. As such, the dentary does many more jobs in mammals than it does in non mammals. In non-mammals the dentary hold the teeth, while in mammals it additionally makes the jaw joint, and accts as the muscle attachment site for the muscles of the jaw. 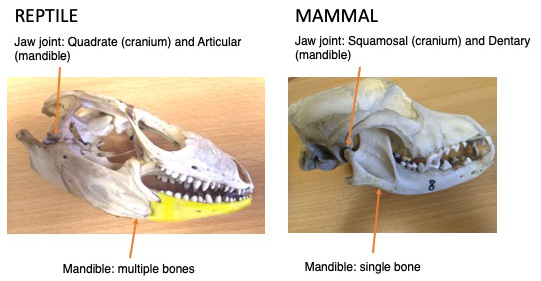 So where have all the other bones gone? Some appear to have been lost, but other have been repurposed and are now part of hearing apparatus. Remember the quadrate and articular that make the jaw joint in most jawed vertebrate? We mammals still have those bones, but we call them the malleus and incus. Alongside the stapes these bones form the middle ear, are the smallest bones in the body, and transmit sound from the air and through to the sensory cells in the inner ear.

How do we know that parts of the mammal middle ear are homologous to the jaw joint of non-mammals? Well, first fossils: this transition is a classic transitional series. 250 million years ago there were stem-mammals that had double jaw joint, and who’s primary jaw joint became involved in hearing (Morganucodon is a textbook example). But we are not palaeontologists, and so we look to another source of evidence:  developmental biology. We know that the middle ear bones of mammals develop as part of the mandible, and only separate after the secondary jaw joint forms (Anthwal et al 2017, Urban et al 2017). However when the jaw joint forms differs across the major groups of mammals.

There are three living groups of mammals, which can be sorted into two subclasses. The therian mammals are marsupials (such as kangaroos, wombats and opossums) and eutherians (aka placentals, though marsupials also have placentas), while the monotremes occupy the other subclass. Living monotremes are the five species of echidnas and one species of platypus. They are now found only in Australia and New Guinea. Monotremes retain a number of more basal characters, which include reproduction via egg laying, a sprawling gait, and a cloaca (a single opening for the reproductive defecatory and urinary systems). They also lack nipples, and instead secrete milk from specialised mammary patches. The young then suck up this milk from the skin on the mother,

Eutherian (placental) mammals have a longer foetal period development than marsupials and egg laying monotremes. So, our jaw joint and middle ear develops either in utero or shortly after birth. In contrast, monotremes and marsupials are born relatively early in development, so early in fact that they haven’t made their mammalian jaw joint yet. So how do they feed? The answer, which we investigate in our new paper recently published in eLife, is via their middle ear bones, which are still part of the mandible at this developmental stage.

Using archived and new samples to take an evo-devo approach

Fossils indicate that the final steps of middle ear evolution happened independently in monotremes compared to eutherians and marsupials, so we thought that  monotremes might use their middle ear differently at hatching. The problem then was how to look at monotreme young, since they’re hardly a model organism. We do have access to an established lab model marsupial, the opossum Monodelphis domestica,  thanks to collaboration with another of my mentors, Karen Sears at UCLA, but monotremes are harder to study. Of the extant monotremes, only the short beaked echidna is not CITES protected, and even that species isn’t amenable to lab work.

Ideally we wanted to look at both extant groups of living monotremes, platypus and echidna. To do so we made use of work done in the past. DMS Watson and others had studied platypus and echidna young in the early 20th century and investigated their cranial development by making histological sections. These slides still exist as part of the Hill Embryology Collection at the Museum für Naturkunde in Berlin, and in the collection of the Zoological Museum in Cambridge. So my PI at King’s College London Abbie Tucker went to Berlin to look at and image the slides there, and we both took turns visiting Cambridge.

We compared these samples from early last century with lab derived developing mice and new born opossums. Anatomically, you can see big differences between each group, including between the marsupials and monotremes. Monotremes have a tiny incus compared to the malleus. In the youngest animals from the museums we were surprised to see the incus fused to the petrosal in the head. Later on they become separated, but they remain articulated, and these articular surfaces remain cartilaginous when the rest of the bone has ossified.

The opossum and eutherian mammals however have a large incus. In opossums the incus appears to be held in place against the head, or possibly cushioned, by a special mesenchyme rich in extra cellular versican. This mesenchyme is missing from eutherians. We think this mesenchyme allows marsupials to suckle before the jaw joint forms, and that this is a different strategy to the fusion seen in monotremes.

The mandibular fusion in monotremes was pretty interesting, as the incus and petrosal developed from distinct parts of the embryo. Mouse and chick studies show that the incus/quadrate forms from first pharyngeal arch neural crest derived ectomesenchyme, whereas the petrosal is mostly mesoderm with a small component of second pharyngeal arch neural crest. So we wanted to look at the monotremes in more detail. What is the developmental anatomy of this fusion? How does the separation occur? To get at these questions we were lucky  to collaborate with Marilyn Renfree and Jane Fenelon at the University of Melbourne, and Steve Johnston at the University of Queensland in Australia to look at echidnas at the youngest stages. Marilyn and her team have had access tot a breeding colony of echidnas at the Currumbin WIldlife Sanctuary in Queensland. Look out for their exciting work  on in egg and early hatching echidnas.

With these fresh samples we were able to look at protein expression by immunohistochemistry in developing post-hatching monotremes for the first time.

We found that the early fusion visible in histology was confirmed by expression of SOX9, a transcription factor that drives cartilage development. In older samples, we also found nuclear beta catenin in the region that would separate the incus and petrosal. Mouse studies show that nuclear beta catenin down regulates cartilage during joint formation. When considered alongside and the cartilaginous articular surfaces we see in the older juvenile specimens we studied form the museums, this nuclear beta catenin expression suggests that a joint forms between the incus and petrosal that may be functional in the feeding process.

Next we looked for any evidence of fusion in mice, taking advantage of genetic reporter lines unavailable in monotremes and marsupials. In simple histology staining, we never see fusion of the incus and petrosal. However, to our surprise, Sox9 Cre reporter mice show that the precursors cells of these two elements are in fact “fused”. So it seems that in mice  the fusion between the incus and petrosal is early and transient. We also found expression of a joint marker – Gdf5- between the incus and petrosal in mouse embryos. We then took advantage of  Mesp1Cre reporter mice, which labels mesoderm tissue, to test where the fusion in Sox9 expression cells occurred. This line told us that the fusions, at least in mice, occurred between the first arch neural crest of the incus and the second arch crest part of the petrosal.

So what does this all mean?

First, we found that marsupials and monotremes have different anatomical strategies for feeding when they are first born – fusion in monotremes versus bracing or cushioning in marsupials. Second, despite the fact that they never need to have a functioning non-mammal jaw joint, mice have a similar transient articulation between their incus and skull to monotremes. This is despite the independent acquisition of the definitive middle ear form in these groups. Given that both mice and echidnas have an articulation, it seems parsimonious that the common ancestor of therian and monotreme mammals (whose middle ear was still attached to their mandible) would have had an incus petrosal joint. We can therefore speculate that this was early in their life before the secondary jaw joint had fully grown.

In adult mammals the middle ear is connected to the mandible ligaments. Developmental defects in the ear and jaw are closely associated. Jaw trauma can lead to knock-on effected in the middle ear. By studying the evolution and development of the jaw and ear, we can also get a better understanding of these connections.