Radial glial cells are multipotent progenitors in the developing vertebrate brain. At their apical interface with the ventricular cavity around which the brain forms, they bear a primary cilium, a signalling and sensory organelle crucial for proper brain development. Today’s paper, from a recent issue of Development, addresses the link between these primary cilia and brain morphogenesis. We caught up with first author Philippe Foerster and group leader Nathalie Spassky of the Institut de Biologie de l’Ecole Normale Supérieure in Paris. 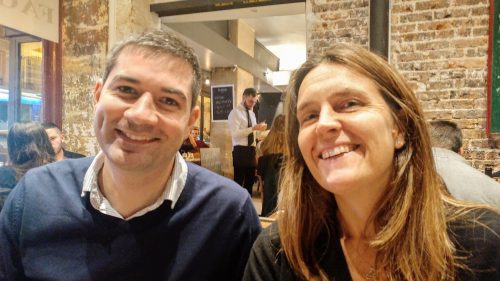 So Nathalie, can you tell us your scientific biography and what questions your lab is interested in?

NS I am a developmental neurobiologist. For my PhD that I obtained in Paris, I studied oligodendrocyte development in vertebrates. I then studied the contribution of multiciliated ependymal cells to adult neurogenesis as a post-doctoral fellow at UCSF. In 2010, I set up my own lab at the Institut de Biologie de l’Ecole Normale Supérieure, in Paris, where we develop multidisciplinary approaches to decipher the development and functions of ciliated cells in the mammalian brain.

What is Paris like for cell and developmental biology?

NS A highly stimulating environment with a great community of labs working on different aspects of cilia biology and brain development. The approaches range from cell biology to genetics and use a large variety of models (Xenopus, zebrafish, planarian, paramecium and rodents).

And Philippe, how did you come to join Nathalie’s lab?

PF I was a student in the Master 2 program in stem cell biology at the Pierre and Marie Curie University (UPMC) in Paris. I joined Nathalie Spassky’s lab for my Master 2 internship, because I was looking for a lab working on embryonic neural stem cells. I already had some experience in that field. What I immediately liked in Nathalie was her ability to mix disciplines (such as physics and biology) to approach things differently. This allowed me to contribute my computer skills to the lab and use them, especially for the analysis of apical surface segmentation.

What was known about the role of primary cilia in brain morphogenesis before your current work?

Can you give us the key results of your paper in a paragraph?

NS & PF Radial glial cells are bipolar cells found throughout the brain during embryonic development. These cells undergo morphological changes during the cell cycle and brain development. We have shown that the enlargement of their apical domain during development is regulated through the primary cilium and the mTORC1 pathway. Although the phenotype observed in the ciliary mutants does not lead to major cortical defects during embryonic development, it initiates postnatal hydrocephaly and might be responsible for major postnatal brain dysfunctions. This possibility is currently being tested in the lab.

Why do you think having a larger apical surface interferes with normal radial glial cell development?

NS & PF Enlargement of the apical surface of radial glial cells affects the orientation of the mitotic spindle, maybe because radial microtubules do not attach correctly to the cell cortex during mitosis. Misorientation of the mitotic spindle leads directly to an increased number of basal progenitors and defects in cortical development, such as an alteration of the number of differentiated cells. Interestingly, we show that this phenotype can be rescued by treatment with the mTORC1 inhibitor rapamycin, suggesting that the apical domain is enlarged in cilia mutants through transduction of the mTORC1 pathway by the primary cilium. Further investigations are needed to determine the molecular mechanisms and whether they involves upregulation of protein synthesis.

Do you have an idea what is upstream and downstream of mTORC1 in this system?

NS & PF We would love to know! We think that the upstream signals could be biochemical and/or mechanical cues that would be sensed by the primary cilia. This was the reason why we generated mutants for the mechanosensory protein polycystic kidney disease 1 (Pkd1). However, no difference in the surface area of radial glial cell apical domains was observed in Pkd1 conditional mutants. It would thus be interesting to study how other mechanical stress pathways might be involved in these regulations. Similarly, the downstream signals should be the focus of future studies as they might involve specific molecular cascades and cytoskeletal modifications that would interfere with cell fate and brain development.

What significance does your work have for our understanding of ciliopathies?

NS & PF Brain malformations are often observed in ciliopathies, although their etiology is still not well characterised. We show that primary cilia defects lead to ventricular enlargement (ventriculomegaly), which initiates postnatal hydrocephalus and might be responsible for major brain dysfunctions that still need to be characterized.

When doing the research, was there a particularly exciting result or eureka moment that has stayed with you?

PF It took me many hours to map the brain ventricle apical surface, which required tonnes of confocal images and lots of adjustments of the segmentation program. My eureka moment arrived when I saw for the first time the colour-coded area map of the apical surface of a Nestin-K3AcKO embryos at E14.5. When I saw lots of enlarged apical domains in Nestin-K3AcKO embryos, I realised that this tiny antenna could play a role in the development of this phenotype. I knew that we were on the right track when we obtained the western blot results showing the implication of the mTOR pathway and rescue with the mTORC1 inhibitor rapamycin. This pathway was already known to be involved in the proper control of cell size.

PF It took at least a year to breed the Nestin-K3AcKO (and IFT88cKO) mutants. At the end of my first year of thesis work, we had many problems with one of the Nestin cre line that we were using, because it unexpectedly displayed ectopic Cre expression. This was very stressful because we had to start the mouse breeding and the phenotype analysis all over again. It took another year to overcome these difficulties, but this time we double checked the cre recombinase expression before drawing conclusions!

Finally Philippe, what are your plans following this work?

PF I defended my thesis in September 2014. I then continued my career but in the world of IT while keeping in touch with the biomedical field. I have been working for more than 2 years now in an IT service company that is dedicated to clinical research.

And where next for the Spassky lab?

NS We are addressing several questions related to the molecular and cellular mechanisms of neural stem cell fate choices, multiciliated ependymal cell development and brain ventricular morphogenesis. To be continued…!!