The epicardium, the layer of cells covering the myocardium, plays an essential role in heart maturation and formation of the heart valves and coronary vasculature. It derives from the proepicardium (PE), a cluster of cells emerging from the inner lining of the pericardial wall, in which the heart is located. During development, PE cells need to be transferred to the surface of the myocardium, in order to form the epicardial layer. It is largely unknown how this process is regulated. Interestingly, this event takes place at a developmental stage at which the primitive heart has started to beat. Indeed, the heart is the first organ to acquire its function, and the role of blood flow in shaping the developing heart is well established, but the role of fluid forces generated in the pericardial cavity surrounding the heart is unknown.

Prior to our study, epicardium formation had been analyzed thoroughly, mainly by electron microscopy, on fixed samples in many different species. These analyses led to the proposal that epicardial precursors could be transferred to the myocardium by two different mechanisms: (1) the formation of a transient bridge between the PE and the myocardium that allows PE cell transfer or (2) the release of PE cell cysts into the pericardial cavity followed by their progressive adhesion to the myocardial surface. Some observations suggested that these mechanisms might be species-specific, while others suggested both mechanisms could work in parallel.

In order to shed light on how epicardial progenitors reach the heart, we set a multidisciplinary approach combining the expertise of the Mercader group in epicardial development (CNIC, Madrid) and the Vermot group in flow forces measurements (IGBMC, Illkirch). Using a novel transgenic reporter line, which marks epicardial precursor cells, combined with high-speed imaging, we found that epicardial precursors delaminate from the PE and are released into the pericardial cavity. There, PE cells and cell clusters circle around the ventricle for a certain length of time until finally adhering permanently to the surface of the heart. In vivo imaging also led to the identification of novel sources of epicardial precursors cells, which were not PE-derived but instead detached from the cranial pericardial mesothelium and were transferred directly to the myocardial surface. It is tempting to speculate that this could potentially represent a different type of epicardial progenitor type.

Advection of PE cells around the ventricle followed by attachment to the myocardium. Imaging at high temporal resolution was used to record a pair of proepicardial (PE) cells advected within the pericardial cavity during heart contraction. As the heart beats, the 2 advected PE cells (AC; white circle) can be seen circling around the ventricle. The second part of the movie, acquired 60 mins after the first, shows the same cell pair attached to the ventricular myocardium. A, atrium; AC, advected cluster; V, ventricle. Reproduced with kind permission from Current Biology.

Thus, transfer of PE cells to the myocardium through an intermediate step of release into the cavity seems to be the predominant mechanism operating in the zebrafish. This prompted our next question: Is the release of PE cells into the cavity dependent on the heartbeat? Blocking cardiac contraction genetically or chemically revealed that in the absence of a beating heart, PE formation as well as epicardial progenitor release was blocked. Together with the observed motion of PE cells within the cavity, this suggested to us that the heartbeat generates a pericardial fluid flow, which in turn directs on PE cells towards the myocardial surface. In order to measure the fluid forces exerted on PE cells we used focused light as a tweezer (optical tweezers). This technology has been developed with the help of Sébastien Harlepp, a physicist specialized in single particle force measurements at the IPCMS of Cronenbourg. We quickly realized that direct PE cell tweezing worked amazingly well to study pericardial flow forces. We could measure very small forces variations generated in the different places of the cavity and were able to show that PE cells are exposed to different fluid forces at different regions in the cavity. More fascinatingly still, sites of high forces correlated with sites of PE formation and sites of low forces, with sites of adhesion to the myocardium.

Thus, cardiac development and function is not only coupled by the blood flow inside the heart, but also by the pericardial fluid advections outside the heart, which play an important role in epicardium morphogenesis. Our next burning question is to unravel the molecular mechanism triggered by the pericardial fluid flow in PE cells driving their detachment from the pericardial wall and release into the cavity, as well as to understand the mechanisms through which the myocardium can trap the PE cells that are “swimming” in the cavity. 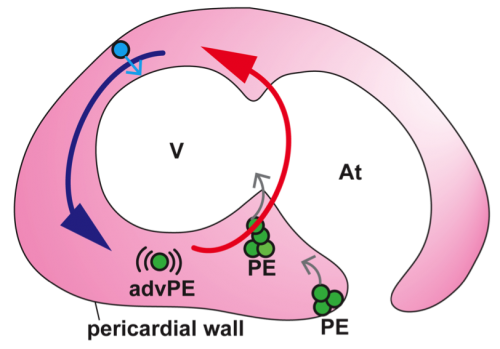 In vivo imaging of epicardium formation in the zebrafish reveals that the beating heart triggers pericardial fluid flow forces, which are necessary to transfer epicardial precursors from the pericardial wall to the myocardium. Blue and Red arrows represent the fluid flow direction and forces. Fluid flow forces are high (red) close to the atrioventricular boundary and lower (blue) around the outer curvature of the ventricle (V). Green circles represent proepicardial (PE) cells, which get released into the cavity (grey arrows). Blue cell represent a precursor derived from the cranial pericardium, which gets directly adhered to the myocardium (grey arrow). An advected PE cell (advPE) is shown, “swimming” in the pericardial cavity (pink). At, atrium.

This post was written following an invitation by the Node team