The second day of the workshop has finished and it is the reporting time now.

We had a wonderful day with fantastic talks and a nice walk around the area. The weather had also been beautifully supportive for these kinds of excursions and this added to the joy of walking around such a splendid place.

The first session on the second day had talks with the general question and theme- is it possible to control the cell fate decisions, particularly in context of neural development, by manipulating/controlling the cell cycle?

The session started with a talk by Philipp Kaldis who investigated the brain of CDK2/CDK4 double knock out (DKO) mice embryos. He found that the brain of these mice showed similar gross structures as the normal brain from control mice, however, the cortical plate and the intermediate zone areas showed reduced thickness indicating reduced differentiation, while the subventricular zone and the ventricular zone containing progenitors were largely unaffected. His work conveyed 2 important points: 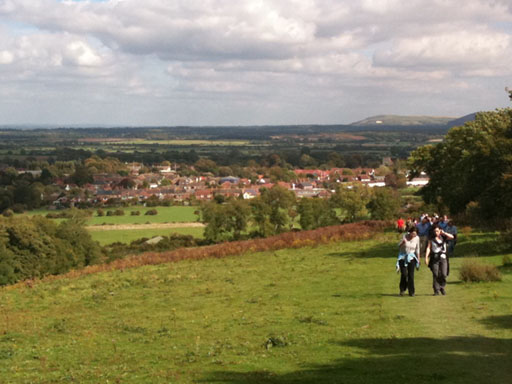 In the second talk, Federico Calegari, followed up on the theme of “cell cycle length (particularly the length of the G1 phase) being a determinant of cell fate during division of neural stem cells in the developing mouse brain”.  He started by describing the process of neurogenesis in mice, which follows thepath: apical progenitor -> basal (intermediate) progenitor -> neuron. He followed with explanation of previous work that supported this idea; work which showed that:

1) the G1 length of neural progenitors increases during development

And finally he showed the amazing results that it is possible to conditionally control the expansion of NSC in the adult mouse brain by temporarily overexpressing CDK4 and cyclinD1 (called 4D), which would initially expand the progenitor pool and then, after stopping the 4D overexpression by genetic manipulation, the expanded pool would eventually differentiate into the neurons. In essence, this new system allows the increase of neuron number in the adult hippocampus, which may have important implications for understanding the role of adult neurogenesis in cognitive function and controlling this process for therapy of neurodegenerative diseases

So we found out that controlling cell cycle length by CDKs and cyclins influences fate decisions in neural progenitors. But the next bigger question becomes- what is downstream of these Cyclin/Cdk molecules responsible for the fate change? And here came Anna Philpott’s insightful talk to our rescue.She looked at the posttranslational modifications of Neurogenin2 which drives neurogenesis. Neurogenin2 has multiple sites for phosphorylation and these different sites show different sensitivity to Cyc/CDK levels, with more sites being phosphorylated at a higher level of CDK. These phosphorylations were shown to negatively affect the stability of Neurogenin promoter binding in a cumulative fashion. Anna nicely showed that the efficiency of Neurogenin2 induction of neuronal markers is inversely proportional to the number of phosphorylated residues.

Linking the data together from Federico’s and Anna’s work, it is tempting to speculate that CDK4 and cyclinD1 induce proliferation of basal progenitors by decreasing the activity of Neurogenin2 and similar differentiation factors.

The last talk of the session was from Kristen Kroll who talked about the role of Geminin in setting up the epigenetic landscape for neural fate acquisition. Kris has long standing interests in how neural fate acquisitionis regulated by Geminin, which she cloned long time back in Mark Kirschner’s lab, as a regulator of both neurogenesis and cell cycle.  Kris nicely showed that knockdown of Geminin, a nuclear protein had no effect on the ability of ES cells to maintain or exit pluripotency, but when she overexpressed Geminin, it promoted neural fate acquisition, even in the presence of growth factors that normally antagonize neural induction. She followed this observation and showed that the mechanism behind Geminin’s ability for neural induction was due to its ability to maintain a hyperacetylated and open chromatin conformation at neural genes. She nicely showed that in ES cells, Geminin had the ability to enhance the histone acetylation on neural promoters and also it binds to the acetylated neural promoters and activate the expression of neural genes, leading to the neural fate acquisition caused by the Geminin overexpression. Thus Kris showed that Geminin functions as an intrinsic factor regulating the neural fate acquisition, by establishing an appropriate epigenetic signature on neural promoters.

During the Monday afternoon session we continued with two talks that link polarity and cell proliferation.  Dr. Helena Richardson presented her work in Drosophila eye imaginal discs about the role of lgl in proliferation.  lgl is a polarity protein that has been implicated in human cancers. Helena found that lgl mutant cells show an increase in proliferation without apparent defects in apical basal polarity. This proliferation mis-regulation is due to a perturbation of the Salvador/Warts/Hippo pathway, and she also presented her preliminary data on novel mechanisms that couple the polarity to the Hippo pathway.

Dr. Nancy Papalopulu spoke on her work on the early neural plate progenitor cells from Xenopus, In this system, cells with different apical-basal polarity properties showed different potentials for proliferation and differentiation. Her work shows that a membrane-bound, active form of aPKC, an apical polarity protein, is able to directly phosphorylate some components of the cell cycle regulatory machinery.  This caused protein destabilization with consequent effects on shortening the length of G1 phase, and promoting proliferation. She proposed that cell polarization is one mechanism that controls the length of the cell cycle, with consequent effects on the differentiation potential of the cells.

The fun (for scientists) continued in the evening with a mini grant writing session where five teams of randomly-paired discussants were asked to come up with a fundable proposal, that incorporated both team members expertise, in 15 minutes!! Proposals included microRNA regulation of oscillatory networks, proteomic screens on limb regeneration, uncovering links between patterning and proliferation, molecular requirements for NSC differentiation, and the importance of G2 phase.  Reflecting the current economic climate, none of the proposals was funded