Developmental neuroscience has traditionally focused on understanding the structural assembly of the nervous system. However, recently it has increasingly been recognized that development also plays a key role in orchestrating the functional assembly of neural circuits1. The neocortex, the center of higher functions in the mammalian brain, can be characterized by its stereotypic lamination at the structural level and the cortical column at the functional level. While the formation of cortical laminae has long been thought to be the direct result of neuronal migration during embryonic and early postnatal development, whether assembly of the cortical column is influenced by similar developmental processes, such as neuronal production and migration, has remained largely unexplored. In a recent study published in Neuron from our lab, He et al. showed that the previously described inside-out radial migration is crucial for the formation of electrical and subsequent chemical synapses between lineage-related excitatory neurons2. Therefore, in addition to generating the correct number and composition of cells to form a structurally intact cortex, normal development appears to also play an important role in the precise functional assembly of cortical microcircuits.

A developmental origin for the cortical column

First described by Vernon Mountcastle in 1957, and later rediscovered by Hubel and Wiesel in their seminal work in the 1960s and 1970s, the cortical column—a group of neurons that are radially aligned throughout the cortical thickness and encode similar features—is thought to be the basic functional unit of the mammalian cortex. Yet, despite the long history of success (primarily in cats and monkeys) in identifying cortical columns functionally through electrophysiological recordings, identification of its anatomical basis and construction has proven difficult. In the last few years, a series of studies in mice have pointed to a possible developmental origin of cortical columns.

Neocortical excitatory neurons are generated from radial glial progenitors (RGPs) in the ventricular zone during embryonic development, and migrate out radially along radial glial fibers to populate the cortex. Yu and He et al. used EGFP-expressing retroviruses to label individual RGPs in mouse embryos (E12-E13) and examined the functional connectivity of their progeny postnatally through electrophysiological recordings. Using this strategy, they discovered that lineage-related sister excitatory neurons derived from the same RGPs are preferentially connected via electrical synapses at early postnatal stages (P1-P4), which facilitates subsequent chemical synapse formation (P10-P21)3,4. In a different study, Li et al. used in vivo two-photon calcium imaging to demonstrate that sister excitatory neurons in the mouse visual cortex exhibit similar orientation tuning response properties—a feature highly reminiscent of the cortical columns observed in cats and monkeys, suggesting that lineage relationship instructs precise microcircuit assembly, which may contribute to the emergence of functional columnar organization in the neocortex5 (Figure 1). However, when and how electrical synapses are initially formed among sister excitatory neurons remained an open question. These questions were the main focus of the study now published by He et al. in Neuron2. 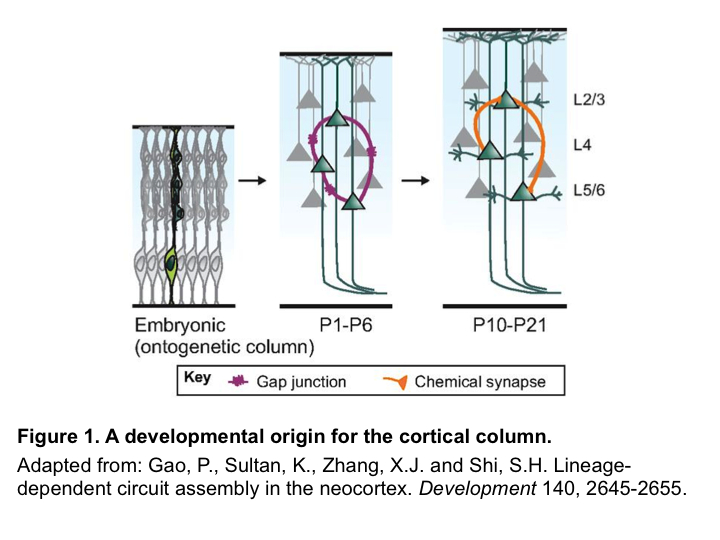 The emergence of lineage-specific electrical synapses

Gap junction-mediated adhesion has been previously shown to facilitate the migration of newborn excitatory neurons along the radial glial fiber. However, whether these gap junctions are conductive (i.e., a functional electrical synapse) is unknown. Using retroviral labeling and electrophysiological recordings, He et al. found that functional electrical synapses do exist between RGPs and newborn progeny in the subventricular zone (SVZ). Importantly, a lineage-dependent bias is already established at this stage: while a RGP is electrically coupled with its own daughters in 100% of cases examined (43 out of 43), the rate of electrical coupling between similarly situated, non lineage-related RGP and SVZ cells is only 16% (8 out of 48)2.

He et al. next examined the emergence of electrical synapses between neurons in the cortical plate—the precursor of neocortex. Again, they observed a significant lineage-dependent bias: while 21% of sister pairs are electrically coupled (9 out of 42), virtually none of the non-sister pairs were coupled (1 out of 66). Furthermore, they found that electrical synapses among sister neurons are formed progressively over embryonic development, increasing from 11% at E16 to 21% at E18, and reaching a peak of 40% at P1-22,4.

Migration of neocortical excitatory neurons occurs in an “inside-out” fashion, where later born neurons migrate past earlier born neurons to progressively occupy more superficial layers. Since sister neurons migrate along a similar path, He et al. reasoned that the inevitable encounter between them may promote their electrical coupling. To test this, they examined the Reeler mice, in which lack of the protein REELIN disrupts the “inside-out” migration and results in an “inverted” cortex6,7. In Reeler mice, sister neurons are unlikely to encounter each other during migration (Figure 2). Using the same retroviral labeling and electrophysiological recording approach, He et al. found that in Reeler mice, although electrical coupling between RGPs and their SVZ progeny remains intact, the preferential electrical coupling between sister neurons in the cortical plate is largely abolished, and subsequent chemical synapse formation is impaired. Clonal knock down of Disabled-1 (Dab1), an essential downstream effector of the REELIN signaling pathway, in wild type mice produced a similar effect, further supporting the notion that the inside-out radial migration of clonally related excitatory neurons is essential for the formation of electrical synapses among them. Furthermore, the authors found that when clones become more dispersed due to an increase in Ephrin-A and receptor signaling9, the electrical coupling among sister neurons is also reduced, suggesting that migration along a similar path is important for electrical coupling between sister neurons2. 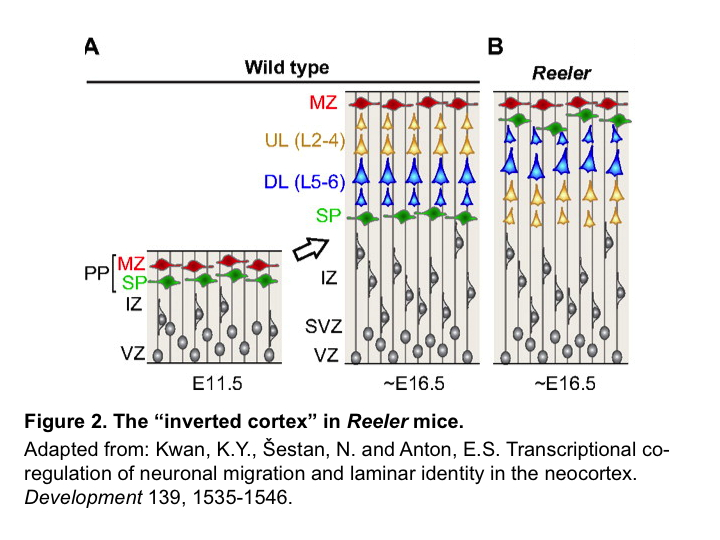 In their landmark 1974 paper10, Hubel and Wiesel postulated, “the cells behave as though they shared certain connections among themselves, but not with cells of neighboring columns, and in this sense a single group of cells is looked upon as a more or less autonomous functional unit…It may be that there is a great developmental advantage in designing such machinery once only, and repeating it over and over monotonously, like a crystal.” New evidence is beginning to shed light on the developmental origin of this fundamental functional unit in the cortex. It appears that clones of excitatory neurons produced from the same RGPs may provide a blueprint for assembling the future functional column. In this process, the preferential electrical coupling between sister neurons represents the very first step of microcircuit assembly. He et al. demonstrated that inside-out migration and spatial localization of neurons serves as a determinant of lineage-dependent electrical synapse formation2. However, like many other important discoveries, this study creates more questions than it has answered. For example, how is the specificity achieved between a RGP and its own daughter neuron, as well as between sister neurons? How does a neuron distinguish its sisters from the numerous non-related cells it encounters along the migratory path? There are likely lineage-specific molecules that facilitate this recognition process. Further, electrical synapses are transient during development, and largely disappear before chemical synapses emerge. How is the transition controlled? The answers to these questions will light a path ahead to a deeper understanding of the most fundamental unit of the mammalian neocortex.