I previously wrote a post about the development of a 4-D X-Ray Tomography technique for imaging early Xenopus embryos. Frog embryos are opaque due to their yolky composition and this has proved a challenge for traditional optical microscopy of events in the early stages of Xenopus embryo development. However Julian Moosmann, Ralf Hofmann and Jubin Kashef at Karlsruhe Institute of Technology (KIT) recently developed a technique using an X-ray setup from a synchrotron beamline to generate images of the frog embryo which they used were able to track events in gastrulation and neural crest migration.

They recently had some beam time at the Advanced Photon Source in Argonne National Laboratory, IL, USA and they kindly invited me along to participate in some frog X-rays. 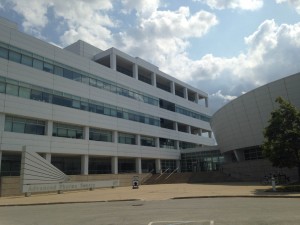 The basic principle of the process is that electrons are accelerated in a linear accelerator (to >99.999% the speed of light) and this beam of accelerated particles is further accelerated by electrical fields to >99.999999% the speed of light in a booster synchrotron, which also uses magnets to focus the beam. X-rays are generated by perturbing the path of the electrons to make them oscillate in the large storage ring. There are 35 tangential lines (we were in Sector 32, with assistance from APS staff members Alexey Ershov and Xianghui Xiao in setting up and operating the beam) which receive X-rays for experimental use, using optical setups tailored for the particular uses required by researchers. 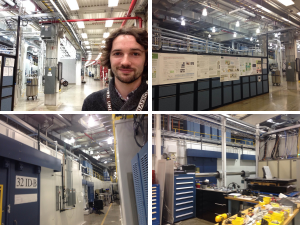 Top panels: The Experiment Hall. Bottom panels, left: The hatch containing the experimental room for Sector 32 and right: the line carrying the beam from the storage ring to the hatch.

The team from KIT place frog embryos (fixed or living) in front of the beam in the setup shown below: an Eppendorf tube containing a well of agarose to hold the embryo in a fixed position is mounted on a rotating stage. For each tomogram, a 360˚ image is generated and for living samples, images are taken at multiple timepoints to generate a 4-Dimensional tomogram across space and time. 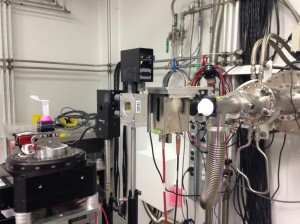 Setup of the sample holder (left, Eppendorf tube on pink stand) in front of the beamline (right).

Obviously having 30 keV of X-ray radiation fired at them doesn’t make for happy frog embryos and after some time they are unable to be imaged further. This is an obvious caveat to the technique but one that can be manipulated through exposure times, much as one would limit the exposure of samples for fluorescence imaging in an optical setup. 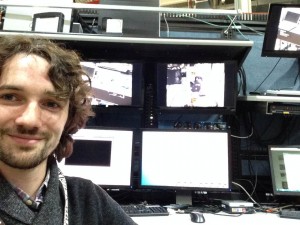 Left in charge of the beam by myself for a few hours!

Look out for this technique as it is developed further; it is clear that the images generated will give us a new view of embryology.

Please feel free to comment/ask questions – a further extended blog will likely appear at Beware of the Frog!
Further information and events:

No terrifying mutant frog monsters/comic-book villains were generated in this work.

For more info about the Advanced Photon Source please visit their website.

Many thanks to Mike Levin at Tufts University for funding my trip out to APS.
References: