This interview, the 60th in our series, was recently published in Development

In development and during regeneration in adults, muscle fibres develop from muscle progenitor cells, and the proliferation, differentiation and fusion of these progenitors needs to be tightly controlled and co-ordinated. A new paper in Development studies the role of the mTOR protein in this process using genetic deletions that target either of the two protein complexes mTOR functions in. We caught up with lead author Nathalie Rion and her supervisor Markus Rüegg, Professor of Neurobiology at Biozentrum, University of Basel, to find out more about the work. 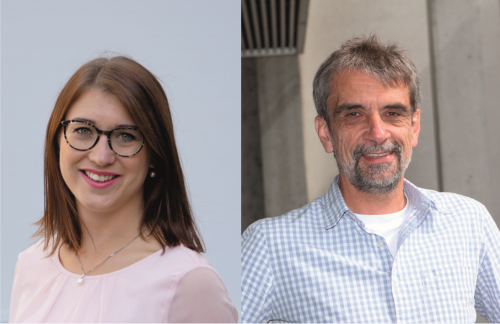 Markus, can you give us your scientific biography and the questions your lab is trying to answer?

MR Even as a young teenager I was fascinated to learn about discoveries of the molecular mechanisms underlying the formation and function of the nervous system. During my PhD studies at the University of Zurich, I characterized cell adhesion molecules that are important for axonal pathfinding, and during my postdoctoral work at Stanford University I cloned and functionally characterized splice isoforms of the protein agrin, the key inducer of neuromuscular synapses. For more than 25 years since then I have been a group leader at the Biozentrum, University of Basel.

My laboratory has also evolved during these 25 years. From initially studying mechanisms underlying neuromuscular synapse formation, we are now interested in how skeletal muscle can adapt to changes in the environment. It is well known that skeletal muscle, which makes up to 50% of the entire body weight, adapts rapidly to changes. For example, if muscle is not properly innervated, it loses muscle mass. Similarly, at old age, muscle mass is lost in a syndrome called sarcopenia. However, the molecular mechanisms driving these adaptive processes are not well understood, and we are trying to better understand them by using mice and tissue culture experiments. In particular, we discovered that changing signalling of the protein mammalian target of rapamycin (mTOR) in skeletal muscle affects the development of sarcopenia in mice. Another interest in the laboratory is to try to develop treatment options for a very severe, rare congenital muscular dystrophy, called MDC1A or LAMA2 MD. In this disease, the muscle fibres cannot withstand the mechanical load that occurs during contraction and, as a result, they degenerate. Over the years, we have developed small linker proteins that are capable of stabilizing the muscle fibres and thereby counteracting this severe muscular dystrophy in mice.

In summary, the common theme of the laboratory is the attempt to understand pathological states of skeletal muscle and its innervation by motor neurons, and to develop approaches to counteract them.

Nathalie: how did you come to join the Rüegg lab, and what drives your research?

NR As a young student, I did not have a defined plan for my future and rather followed my curiosity and my fascination with nature and what is still to be discovered. I was an undergraduate at Biozentrum, and like all students there, I was introduced to all the research groups of the institute. The course of Markus and his group instinctively drew my attention and subsequently formed my future career. He is extremely motivated and engaged in supporting and educating students. I was very fortunate to have the possibility to learn, work and develop in his lab, not only professionally but also on a personal level. My research was also greatly driven by my mentor and supervisor, Dr Perrine Castets. She is an extremely talented, hard-working and dedicated researcher and teacher who inspired and motivated me during the past 8 years. We worked very closely together in Markus’s lab and supported each other in our projects. Therefore, I would like to emphasize her great contribution to this work and thank her for all her support.

Prior to your work, what was known about the role of mTOR-and the relative roles of its mTORC1 and mTORC2 complexes in muscle development?

NR & MR Published work mainly investigated the role of mTORC1 and mTORC2 with shRNA-mediated knockdown experiments in cultured myoblasts from a mouse cell line (C2C12). These results suggested that mTORC1 had a role in muscle differentiation, but there were others who provided evidence that this function was largely mTORC1-independent and mTORC2-dependent. Another important piece of work showed that activation of mTORC1 was involved in the ‘priming’ of quiescent satellite cells for activation. This work, however, did not study its role in regeneration or in myogenesis. In addition, previous work from our laboratory using Cre-drivers specific for skeletal muscle fibres showed that depletion of raptor (an essential component of the mTORC1 complex) but not of rictor (an essential component of the mTORC2 complex) during muscle growth led to myopathy. It was thus important to understand the role of raptor and rictor during myogenesis and during regeneration in the adult muscle.

NR & MR By depleting raptor or rictor in embryonic muscle progenitors, we show that mTORC1, but not mTORC2, deficiency in developing muscle impairs embryonic myogenesis without completely abolishing it. Inactivation of mTORC1 in muscle stem cells impairs injury-induced regeneration of the adult tissue due to a delay of activation and commitment into the myogenic lineage, as well as proliferation deficits. In vitro, raptor depletion in myoblasts slows down proliferation, differentiation and fusion. Nevertheless, muscle progenitors deficient of mTORC1 signalling contribute to the formation of skeletal muscle.

Do you think mTORC1 is doing the same thing in embryonic and regenerating adult muscle?

NR & MR This is a difficult but very interesting question. From our work, one can conclude that the cell-intrinsic function of raptor in the embryonic and adult stages is similar. Proliferation of raptor-depleted cells, isolated from embryonic or adult skeletal muscle, is strongly impaired, and of course proliferation is an important process in embryonic myogenesis and adult muscle regeneration. However, the extracellular environment is quite different between embryos and adult muscle. Hence, differences in extrinsic factors could also affect the dependence of satellite cells on mTORC1 signalling.

How do you think muscle progenitors that lack mTORC1 are able to form myofibres?

NR & MR Removal of raptor does not completely abolish protein synthesis. Hence, a low, basal level of protein synthesis may suffice to allow some regeneration and myofibre formation in the absence of mTORC1 signalling. Thus, non-mTORC1-dependent pathways, such as the Mnk1/Mink2 kinases, could become active. It would be interesting to investigate whether there is such a compensatory mechanism and to investigate the possible reasons for this.

NR Thinking back, I can still remember the first time I performed FACS sorting from embryonic muscle tissue as one of my biggest eureka moments. It was so fascinating and exciting for me to see that it is possible to isolate, analyze and culture living cells from such a tiny amount of tissue, and that the cells survive such a long and harsh procedure.

NR Our embryonic work required us to set up timed-matings before the actual experiment could be initiated. Therefore, the most challenging part of this project was to deal with the long timelines and associated limitations, including the small amount of harvested muscle tissue arising from our Rptor knockout mouse model. My biggest despair was when, after these long planning phases, the females were not gestant, no Rptor knockout embryos were among the offspring, or an experiment just failed. However, I learnt from such unfortunate events, and still had a great time working with mouse models: they allowed me to analyze the role of mTOR in myogenesis at both an embryonic and an adult stage.

So what next for you after this paper?

NR I highly enjoyed doing laboratory research for the past 8 years, and I was very fortunate to work on such a fascinating project. After completing my PhD studies and this project, I wanted to change my point of view in science and learn about the journey of medicines from research and development in pre-clinical and clinical studies towards marketing authorization. Today, I am proud to be an employee at SFL Regulatory Affairs & Scientific Communication GmbH, here in Basel, in the field of regulatory affairs. I am very happy to implement my knowledge and experience from research, scientific writing and project management in the support we provide to clients, ranging from regulatory strategy and advice on the development of healthcare products to hands-on operational support during product registration and postmarketing activities.

Where will this work take the Rüegg lab?

MR The work now published in Development was the first time we looked at myogenesis per se and examined the function of satellite cells (the adult muscle stem cells). Satellite cells are also the cells that allow muscle fibres to fully regenerate after an injury, and we found that mTORC1 signalling is important for the regenerative process. Now, we would like to study the molecular processes that are involved in muscle regeneration in general, with the aim of understanding why regeneration is often hampered in the context of muscular dystrophies. Although muscular dystrophies are primarily muscle-degenerative diseases, successful regeneration of muscle is of fundamental importance to overcome some of these degenerative processes. Recent evidence indicates that in many muscular dystrophies, including MDC1A/LAMA2 MD, muscle regeneration is severely impaired.

For me, cooking and baking are quite similar to performing an experiment

Finally, let’s move outside the lab – what do you like to do in your spare time in Basel?

NR I play the piccolo (a special flute) at the Carnival of Basel, which in 2017 was added to UNESCO’s list of Intangible Cultural Heritage. Between February and March each year, Basel transforms into a large, jovial festival with costumed carnivalists, concerts and parades of fife and drum cliques, lanterns and wagons for 72 h.

Besides playing music and enjoying sports, I am a passionate baker and cook, especially in the company of my family and friends. For me, cooking and baking are quite similar to performing an experiment. Both procedures are based on the following of a ‘recipe’ with described components and processes. However, the understanding and feeling for the individual steps and ingredients determine the success of the outcome.

MR As I mainly sit at my desk during work, I need to get some physical challenges. I therefore enjoy all kinds of sports activities, my favourites being jogging, bicycling, hiking in the summer and skiing in the winter.

A multifaceted science communication opportunity centred around your community site